We traveled from Dublin down to Kinsale (you can see this trip in our previous post, “On the Left”). We spent two nights in Kinsale, exploring the old town and taking down a good amount of Beamish, which is the less expensive but still delicious southern Ireland version of Guinness.

The town itself was a quiet fishing town, with narrow winding streets and colorful historic facades. Navigating the streets, even in our tiny rental car, was quite the experience. What seemed to be narrow one-way streets with buildings directly fronting very small sidewalks were actually two-way streets with miniscule space for margin of error. Our tour guide, Barry, affectionately called the city street system a bowl of spaghetti.

We had a very pleasant second evening in a random pub we stopped in for “just a pint”.  This one pint turned into a handful of pints of Beamish late into the evening.  This is because we made acquaintance with the bartender, then a couple of locals, and then several other tourists.  The tourists we met were Derek and Ryan from all places Indiana, and a German couple, Katrin and Jurgen.

Funny story: Derek and Ryan work for Eli Lilly in Indianapolis, which is where my dad works. My dad had told me prior to our trip that Lilly has a plant in Kinsale, which happened to be where Derek and Ryan had been stationed for three weeks. To top that off, one of the locals that we were hanging with, Vincent, also worked for Lilly in Kinsale. It’s a small world after all!

Here is a very quick snapshot at the history of Kinsale: Irish lived there, English oversaw, Spanish came, all three fought in 1601, English won, English fortified the harbor,  English withdrew, back to Irish living. 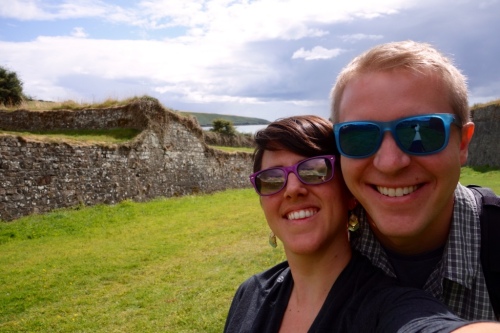 Alissa inside Charles Fort, with her scarf map

Here is another interesting historical tidbit: the harbor used to come much further into town than it does currently. Due to erosion and sediment deposits, the harbor began to recede. To mitigate the problem, the Irish took loads of the abundant shale in the area and infilled over the sediment and built on top of it. The rock that Alissa is standing on below marks the point of the old harbor.

Alissa standing at the tip of the old harbor

Next stop, the Dingle Peninsula!